An overwhelming majority of Americans are looking to research universities to be the foremost drivers of innovation at a time of anxiety over global competition, according to a new Innovation Indicator survey from the Polsky Center for Entrepreneurship and Innovation at the University of Chicago.

The Polsky Innovation Indicator found that 71 percent of Americans believe research universities are a “major force” in driving U.S. innovation, considerably more than the number who said that of large corporations, startup businesses or government. The survey also points to real challenges for global competitiveness, with just one in four people viewing America as the global leader in innovation. That suggests a growing need for universities to provide leadership through field-defining research and applying new knowledge to benefit society.

“Even though innovative ideas continue to flow from American universities and businesses, greater global competition means we need to do even more to maintain our leadership position,” said Steven N. Kaplan, faculty director of the Polsky Center and the Neubauer Family Distinguished Professor of Entrepreneurship and Finance at the University of Chicago Booth School of Business. “That takes both research funding and energizing people to commercialize that research through discovery and entrepreneurship.” 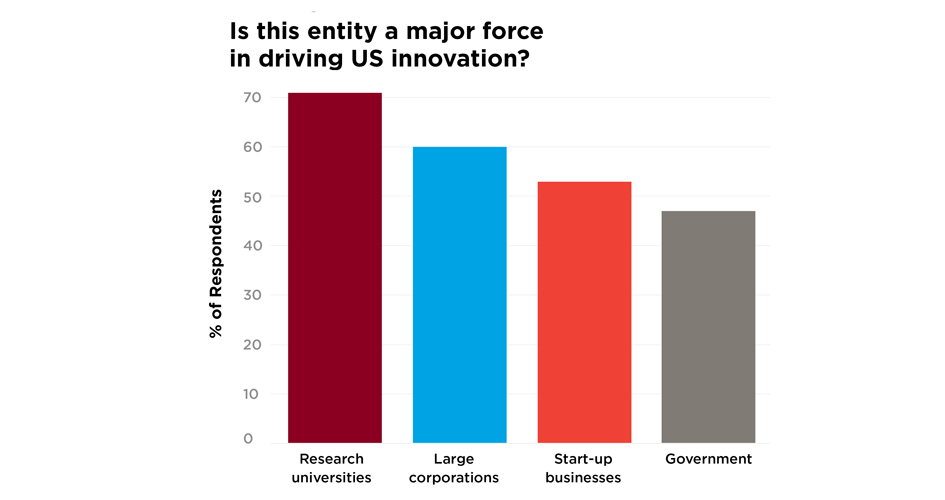 (Image courtesy of Polsky Center for Entrepreneurship and Innovation)

The Polsky Innovation Indicator was conducted in April by NORC at the University of Chicago and released to coincide with the UChicago Innovation Fest, which runs May 1 through June 3, celebrating pioneering discovery and entrepreneurial endeavors at the University.

Speaking at a May 2nd event announcing the survey results at the Polsky Exchange, U.S. Senator Dick Durbin agreed that research universities are an important catalyst for American innovation, augmenting the actions of the federal government.

“The federal government can provide an environment for growth, but it’s the next generation of entrepreneurs and innovators around the U.S. who are going to lead us to a successful 21st century,” Durbin said. “UChicago’s Polsky Center for Entrepreneurship is creating an environment where they can excel.”

The Polsky Innovation Indicator found that 28 percent of people surveyed said they consider the U.S. the world’s leader in innovation, with 29 percent saying the nation is falling behind and 42 percent viewing the U.S. on par with other industrialized countries.

The survey results follow recent reports raising concerns about the U.S.’s global competitiveness in innovation. The 2018 Bloomberg Innovation Index placed the United States out of the top 10 most innovative economies for the first time in the report’s history. The number of new companies in the U.S. has dropped by half since 1980, producing what some economists have labeled a “startup deficit,” slowing productivity and economic growth. In 2016, for the first time, Chinese venture capital fundraising matched U.S. levels—with much of that investment coming from within China’s borders.

As for what fuels innovation in the U.S., 71 percent of respondents said research universities are a driving force for innovation versus 60 percent for large corporations, 53 percent for startups and 47 percent for government. At the same time, more than half of respondents in the Polsky Innovation Indicator considered declines in public and private funding a major barrier to innovation.

“This survey reinforces what the American people see every day—that our research universities have propelled the United States to a global leadership role in innovation and are essential public goods. But without robust and sustained federal research investments, research universities will be unable to help ensure that the U.S. remains at the top, by providing the people, ideas and discoveries that enhance our economy, improve our public health and bolster the national defense,” said Mary Sue Coleman, president of the Association of American Universities.

“Universities still need to find a more effective way to help innovators move their discoveries into the marketplace. At UChicago, the Polsky Center is providing a distinct engine for advancing innovation,” said Eric Isaacs, Executive Vice President for Research, Innovation and National Laboratories at UChicago, at the Polsky event. “We’re building on our record by putting pieces into place that enable us to open new facilities and launch new ventures dedicated to enriching lives here in our community and across the world.”

The Polsky Innovation Indicator survey was conducted by NORC at the University of Chicago for the Polsky Center for Entrepreneurship and Innovation at the University of Chicago. Interviews for this survey were conducted between April 11 and 16, 2018, with adults age 18 and over representing the 50 states and the District of Columbia. 1,086 panel members completed the survey—975 via the web and 111 via telephone. The overall margin of sampling error is +/- 4.2 percentage points.

The University of Chicago Polsky Center for Entrepreneurship and Innovation brings the power of ideas in the laboratory, classroom and community to the world. Through education, resources, and programs, the Polsky Center commercializes discoveries, partners with companies, and attracts venture capital. The Polsky Center runs UChicago’s top-ranked business accelerator, the Edward L. Kaplan, ’71, New Venture Challenge, which has helped launch more than 185 companies worldwide that have gone on to achieve more than $10 billion in value and raised over $600 million in funding. The mission of the Polsky Center is to support students, faculty, alumni, and community members by bridging the gap between knowledge and practice, idea and action, and research and impact. By igniting a spirit of innovation and fostering connections that extend across the University, city, region and world, the Polsky Center enables more ideas to have a meaningful impact on society. Learn more at polsky.uchicago.edu.

NORC at the University of Chicago is an objective, nonpartisan research institution that delivers reliable data and rigorous analysis to guide critical programmatic, business, and policy decisions. Since 1941, NORC has conducted groundbreaking studies, created and applied innovative methods and tools, and advanced principles of scientific integrity and collaboration. Today, government, corporate, and nonprofit clients around the world partner with NORC to transform increasingly complex information into useful knowledge. Learn more at norc.org.

Dean John W. Boyer to transition into role as senior advisor in 2023