As China marks its four-year anniversary of declaring “war against pollution,” a new analysis using data from more than 200 government monitors throughout the country finds air pollution has decreased across the board in China’s most populated areas. Cities on average have cut concentrations of fine particulates—widely considered the deadliest form of air pollution—by 32 percent in just four years.

“The data is in—China is winning its war against pollution,” said Michael Greenstone, the Milton Friedman Professor in Economics and director of the Energy Policy Institute at the University of Chicago, who conducted the analysis. “By winning this war, China is due to see dramatic improvements in the overall health of its people, including longer lifespans, if these improvements are sustained.”

The most populated cities saw some of the greatest declines: Beijing cut air pollution by 35 percent; Shijiazhuang, the Hebei Province’s capital city, cut pollution by 39 percent; and Baoding, China’s most polluted city as of 2015, cut pollution by 38 percent. If China sustains these reductions, Greenstone finds that residents would see their lifespans extended by 2.4 years on average. The roughly 20 million residents in Beijing would live 3.3 years longer, while those in Shijiazhuang and Baoding would add 5.3 years and 4.5 years onto their lives, respectively. These improvements in life expectancy would be experienced by people of all ages, not just the young and old.

The analysis is the first in a series highlighting pollution challenges and improvements globally, drawing from the method underlying the Air Quality Life Index, which EPIC introduced last year and plans to fully release in the coming months. The Air Quality Life Index shows the potential gain in life expectancy communities could see if their pollution concentrations are brought into compliance with World Health Organization or national standards. It is based on two studies conducted by Greenstone and co-authors that convert concentrations of fine particulates (PM2.5) into their impact on lifespans. 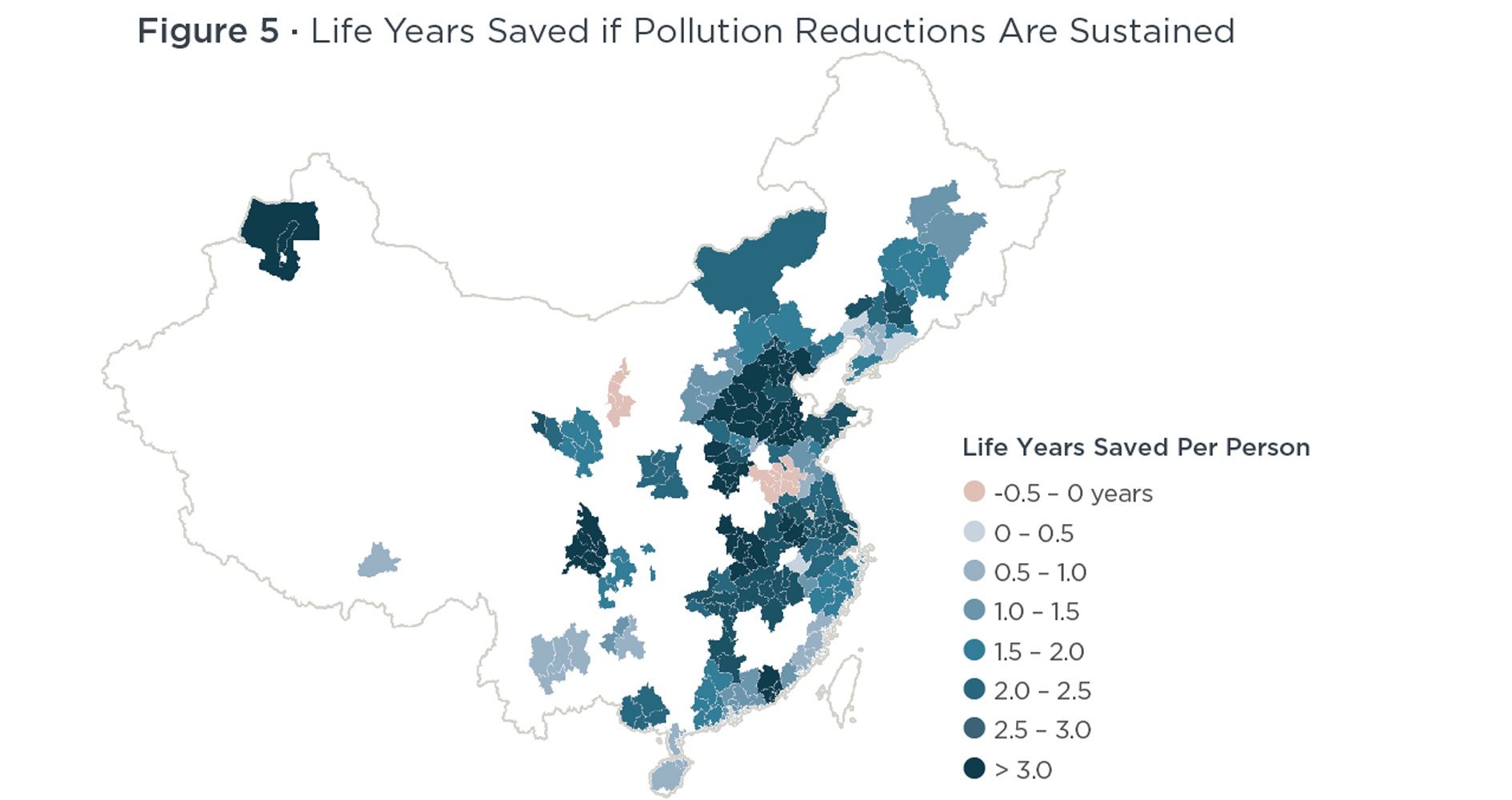 A figure from the study maps pollution data from the China National Environmental Monitoring Center and calculates life years saved using the AQLI methodology. (Courtesy of Energy Policy Institute at the University of Chicago)

Notably, while China has seen a marked improvement in air pollution, their levels still exceed these global and national standards, as the AQLI shows. Bringing the entire country into compliance with its own standards would increase average life expectancies by another 1.7 years, in the areas where data is available. Complying with WHO standards instead would yield 4.1 years.

“China has taken aggressive, and in some cases extraordinary, measures to reduce its pollution in a relatively short time span—from prohibiting new coal-fired power plants in the most polluted regions to physically removing the coal boilers used for winter heating from many homes and businesses,” Greenstone said. “This approach, which has relied heavily on requiring specific actions as opposed to more efficient market-based mechanisms, has imposed its share of costs on the Chinese economy. There is a great opportunity to facilitate the urgent need for continued rapid economic growth and achieve further reductions in pollution by embracing market-based approaches to regulation, like pollution taxes and cap-and-trade markets for pollution.”