Her success adds further credibility to XS Tennis, a South Side nonprofit Murray founded to help minority youth rise in the game of tennis and gain access to often untouched tennis college scholarships. XS Tennis partners with the University of Chicago’s Civic Knowledge Project to provide free academic tutoring alongside his tennis coaching.

While Stephens isn’t from Chicago, “she is an example of winning to encourage other minorities to pursue the game,” said Murray, who also received a trophy as Stephens’ coach. “Her win further legitimatizes that minorities belong in tennis.” 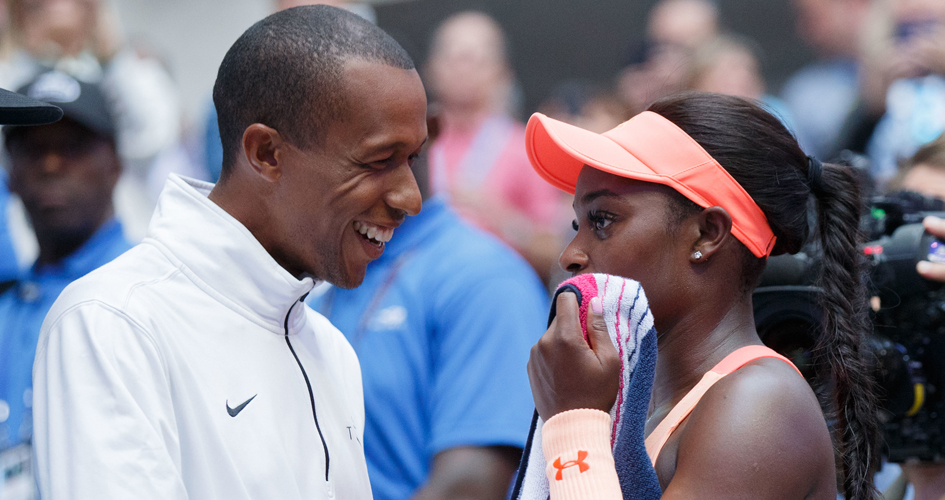 The triumph also affirms that XS Tennis is more than just a community center. It has the potential to become an incubator for U.S. tennis champions from diverse backgrounds.

Murray, 36, has coached several tennis hopefuls to earn college scholarships and professional wins, including Chicagoan Taylor Townsend, who played at Wimbledon and the French Open. The coach phenom is in full swing these days, expanding his vision into the XS Tennis Village, a new $12 million tennis center on the former site of the Robert Taylor Homes public housing complex on State Street between 50th Street and Garfield Boulevard.

On Nov. 1, the tennis center will open to feature 12 indoor courts and 15 outdoor courts—and the ability to accommodate more than 4,000 students. It also will provide space for activities such as after-school tutoring, which is free and open to all pre-kindergarten to 12th grade students between 4 and 7 p.m., Mondays through Thursdays during the academic year, even if they don’t play tennis.

In addition to the University’s tutoring partnership with XS Tennis, UChicago’s tennis teams have held practices at the facility for several years. “The XS Tennis facility has been a home away from home for UChicago Tennis,” said Erin McDermott, UChicago’s director of athletics and recreation. “Our partnership has been critical to the success of our teams and has made it possible for us to host competition, including NCAA Regional Championships, during inclement weather.”

The University has provided philanthropic support for the new tennis center, and UChicago Tennis will move its practices there when it opens. The city of Chicago has also contributed $2.9 million, and the project has received substantial corporate and foundation support, along with donations from friends of Mayor Rahm Emanuel. Still, Murray, a former pharmaceutical sales executive, said that expansion from XS Tennis’ previous digs at a smaller fitness and tennis club on 47th Street to the new location has been a hard sell.

“Before the U.S. Open trophy, there was not a lot of belief by many people in what we are doing,” Murray said. “I’m grateful to the people who stood by me from the beginning. We can now tell the naysayers, ‘I told you so.’”

Murray grew up playing tennis on the South Side and earned a full tennis scholarship to Florida A&M University in Tallahassee. He has been giving back to the community for more than a decade through XS Tennis, in partnership with the Civic Knowledge Project, which is part of the University’s Office of Civic Engagement. The Civic Knowledge Project facilitates Winning Words, an award-winning public ethics program that works with pre-college students, from pre-kindergarten through 12th grade.

The program introduces philosophy to young people and encourages them to think about values and issues in a reflective and methodical way. It also works with students on reading, writing, public speaking, drama, poetry and art. The curriculum uses the Socratic method to engage students in philosophical conversation and to encourage critical thinking, reasoning and expression.

“XS Tennis has been a great meeting ground for kids from all across the city, and it has provided a great opportunity for University students to get involved in the community,” said Bart Schultz, director of the Civic Knowledge Project and senior lecturer in philosophy. “Both graduate and undergraduate University students tutor there throughout the year, including during the summer as part of tennis camps.”

Tutoring and tennis have proven to be a winning pair on the XS court.

“Our partnership with the University of Chicago is integral to what we do on the tennis court,” Murray said. “If students don’t pass the ACT, then all the efforts on the court go by the wayside. We’re building tennis players, and we’re building students.”

Paul Alivisatos named next president of the University of Chicago